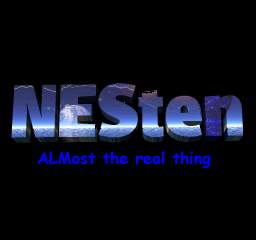 A few bugs have been found in iNES.DLL v1.3 (mapper 23 IRQs were not properly enabled, mapper 43 would not initialize properly). If you downloaded the DLL set within the first 2 days of it being released, please re-download them. Sources have also been updated.
Also note that there are bugs present in NESten 0.61 Beta 2, at least one of which affects Sprite 0 hit. If you notice a game with corrupted graphics or random crashes, try switching back to 0.61 Beta 1.

New mapper DLLs have been released for NESten. Go to the Mappers Page to download them.
Note that these will be the FINAL DLLs I will be releasing for NESten; if you want to add new mappers, feel free to download the sources and create your own new mappers (but don't include the old mappers).
The main reason I will no longer be writing mapper DLLs for NESten is that Nintendulator is no longer compatible with them (due to numerous interface changes), and I have no desire to maintain two sets of nearly identical mappers.

For those of you who still use NESten, a pre-release of version 0.61 Beta 2 has been floating around for a while. Download it here. Changes from 0.61 Beta 1 are currently unknown.

Since NESten is no longer being developed, check out Quietust's new NES emulator called Nintendulator.
Uses the same mapper DLLs as NESten 0.61 and features remarkably high emulation accuracy.
Games known to have timing issues (Marble Madness, Pirates!, Mother, etc.) should work nearly flawlessly.
WARNING: Minimum system requirements include a 600MHz or faster processor.
Windows 2000 or XP is recommended, though it will work under Windows 98/Me (though it will not remember your ROM folder).

If you find any bugs or have any features to request, please post them in the appropriate tracker on SourceForge.

Mappers have been updated. Go get 'em! Mappers Page.

kaillera is implemented and working... Some minor changes is needed from the kaillera author to ensure that users of NESten avoid some of the problems I am having right now... (NESten doesn't work the same way as MAME)
Synchronization seems to be perfect, and I must admit that the kaillera author has done a very nice job. Up to 4 players is supported... 4 Player RC Pro AM 2 anyone? :)

Quietust has done a little update on the mappers. Mappers Page.

Just a little hint... PLEASE delete or move the old version before installing the new one, or you will have a lot of errormessages... Either delete old, or install to a new directory!!! Thanks :)

Hi again, it's been a while since last release, but waiting never hurts :)

Since mappers have become external (since NESten 0.6 Beta D), you can now expect a regular update for them only, without having to download a new version of NESten. The new updated mappers will reside on the Mappers Page. This page will be managed & updated by Quietust. (New games supported and so will be on that page)

And as always, here is what's new:

- Lots of new Mappers supported....
- UNIF Support
- Partial FDS Support
- Fixed a bug where sound did not get "released".
- Some speed gains, some losses.
- Small bug fixes here & there.

Other NES emulators can be found here.

Though I recommend: If you are one of those that actually like the music on the NES or SNES,
... don't wait ... visit ZD's NSF archive and ZD's SPC archive

Please support BSA. Give them some work to do!